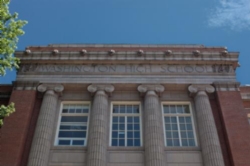 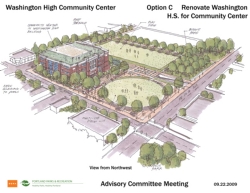 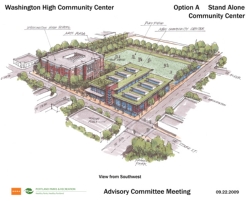 City Working On Renovation For New Community Center
The City of Portland is working on new plans for a community center.  Two design options are being considered. Both design options include the same program elements, including: lap pool, leisure pool, meeting space, fitness rooms, wood floor studio, kitchen and a gymnasium. Both designs plan for underground parking. Portland Parks and Recreation are looking for feedback on the proposed plans.
Seattle architects and alums  Scott Douglas and Ron van der Veen and (both Class of 1976) prefer Option C.
Douglas says, "Short of converting Wa-Hi back into an actual school, I support the Option C concept.  While attempting to retro-fit large existing buildings with new unintended uses is often a major challenge, it can also lead to creative solutions significantly more interesting than a building designed from scratch.  Additionally, Option C maintains the westerly view axis to and from the "front door" of the only stately facade of an otherwise non-descript brick building.  Though I have exceptionally fond memories of my high school days, the old structure lacks the visual impact of many other Portland high schools of similar vintage.  I say let's reinforce the positives!"
van der Veen adds, "My sense is that refurbishing WAHI to its original civic grandeur and reconnecting it to the urban fabric is best accomplished in the second scheme.
The first scheme gives the structure little breathing room and deemphasizes its civic presence in the neighborhood.  It seems more like it is part an assembly of disparate structures than a coherent campus.   The proposed new building does little in scale, form or detailing to reference it’s stoic elder.
In the second scheme the circular green acts a platonic foreground for the front façade, reinforcing its symmetry and ordered geometries.  This scheme also calls attention to the grand formal front staircase by allowing its energy to dissipate all the way to 12th Avenue through a series of terraces.  The choreography of the transition between 12th and the front door is now quite elegant and sophisticated.
The real question as we look towards the future of WAHI is how do we want it to be perceived for in the urban context.  In scheme 1, the building is just another urban infill with no particular civic hierarchy, while the second scheme gives the structure a presence that begins to reestablish its historical importance."
Class of 1976 alum Matt Spathas thinks it would be great to include a 21st Century high school / learning environment - called Linus Pauling High - modeled after San Diego's High Tech High (a charter school) and a City library.  Spathas says "Portland has a great opportunity to create much more than a community center - a place that can be used for a school by day and community center and library at nights and weekends.  This type of mixed campus would bridge generations for years to come and would serve as a model for cities of the future".
To learn more or offer your comments see Portland Parks and Recreation - Washington High School.
Print