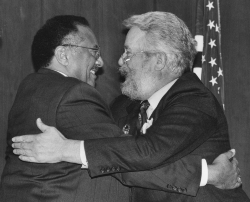 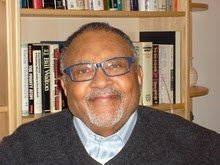 By Kimberly A.C. Wilson, The Oregonian

Dick Bogle, who pioneered the way for Portland-area African Americans in law enforcement, television news and politics -- all while nurturing a deep love of jazz and photography -- died early Thursday in Vancouver. He was 79. Bogle, the first black television news anchor on the West Coast and the second African American elected to Portland's City Council, died at Legacy Salmon Creek Hospital in Vancouver of congestive heart failure, said Nola Bogle, his wife of 33 years.
Bogle was an officer with the Portland Police Bureau from 1959 to 1968 before shifting to television, working as a reporter and anchor at KATU (2) for 15 years. After his years in television news, Bogle was elected in 1984 to the City Council, where he served as a commissioner for eight years before losing a bid for re-election to Charlie Hales in 1992.
Afterward, Bogle attributed his loss to an anti-incumbent mood among voters, low turnout, and controversies over travel expenses and a harassment complaint filed against him. But he went out on a high note.
"I promised I would work to make Portland a city my grandchildren would be proud of," Bogle said on his final day as commissioner in 1992. "I have and it is." Mike Lindberg, who served 17 years on the council, said he and Bogle had a close personal relationship that went beyond politics  "We just naturally gravitated toward each other," Lindberg said. "There was complete trust and honesty from the day he started until the day he left. I'd say we voted the same about 98 percent of the time. He brought his background on the Police Bureau to the council."
Lindberg said whenever he and Bogle traveled out of state on city business, they usually wound up at a jazz club together. "He was well-respected for his jazz reviews and for his collection of jazz recordings," Lindberg said. "He always lived with gusto, and lived an extremely full life." A jazz historian, Bogle was a resident contributor to DownBeat magazine, volunteered at KMHD jazz radio station and maintained a Web site for his jazz reviews until last August, when his health began to fail, Nola Bogle said. He was also the jazz columnist for The Skanner newspaper in Portland.
Bill Hilliard, former editor of The Oregonian, grew up with Bogle in the 1930s and '40s in Southeast Portland. "We lived on the same street in an integrated neighborhood," said Hilliard, who also is African American. "We grew up without any real racial prejudice, which served us well in our adult lives. He was an inspiration to a lot of kids growing up in the city." The two attended what was then Hosford Elementary School together, and often went to cultural events in the city with Bogle's mother, Kathryn Hall Bogle, the noted civil rights pioneer who in 1941 became the second African American to hold government office in Portland. Bogle's ancestors arrived in the Oregon territory in the 1840s and 1850s. Hilliard, who started at the paper writing jazz reviews, said Bogle also had a keen interest in jazz and asked Hilliard how he got the job. Most of all, he wanted to know how he got records from the record companies. "I told him to just write to them," Hilliard recalled. Bogle wrote his first review in 1952, when he was 22, for the Portland Challenger newspaper. He had fond memories of his years with the Police Bureau, as well. Among them was being assigned to the Grand Floral Parade. "That was good because you could move around and everyone was having fun," he told The Oregonian in 2007. "We used to carry a little vial of ammonia and so if someone fainted you could give them a whiff and bring them around." In April 2008, Bogle joined the Portland Police Bureau's cold case unit. He said he and other ex-cops were stunned by how much the atmosphere had changed since their days on the force. "It was a more raucous place, and it was all male," Bogle said of his years as a cop. "It was really different, with a lot more laughter." No funeral is planned, Nola Bogle said. But a celebration of her husband's life is tentatively set for March. Along with his wife, Bogle is survived by his son, Richard H. "Buddy" Bogle, of Mt. Vernon, Wash.; and four daughters, Richelle Lewellyn, of Los Angeles, Renita Byrd, of Decatur, Ga., Ericka Turay, of Beaverton, and Tiffany Peaks, of Palmer, Ala.
Print