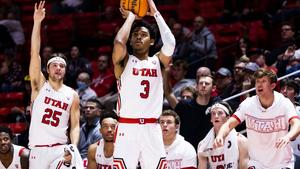 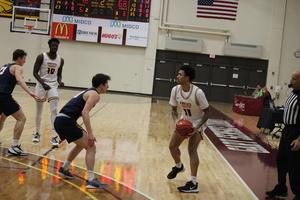 Cols Billy Holt (75) and Thomas Channel (72) Sons Playing at Next Level
Bostyn Holt
2020-21 (SOPHOMORE) COFFEYVILLE CC
Helped lead Coffeyville Community College to an NJCAA Division I Championship and 27-3 overall record as a sophomore … also led Ravens to KJCCC Championship with an 18-2 mark … averaged 9.6 points, 6.5 rebounds with a .569 shooting clip while starting in 21 of 30 games in 2020-21 … had a great playoff run, averaging 11.6 points, 6.8 rebounds and 2.1 assists with a .556 shooting clip in eight playoff games … reached double-figures in scoring 17 times and had four double-digit rebounding games … scored a career-high 21 points with nine boards against Cloud County CC (3/17) … recorded double-double in the championship game against Cowley County CC (4/24) with 12 points and career-high 13 rebounds … finished JUCO career averaging 8.1 points, 5.1 rebounds and 2.0 assists with a .540 shooting clip.

2019-20 (FRESHMAN) COFFEYVILLE CC
Started in 17-of-34 games as a freshman at Coffeyville CC and averaged 6.7 points, 3.9 rebounds and 2.2 assists with a .509 shooting clip … ended the season on a nine-game winning streak before COVID-19 shut everything down … made his JUCO debut against Southwestern JV (11/1), scoring eight points with three rebounds … scored a season-high 17 points against Minnesota Prep (11/9) and tied it once again versus Neosho County CC (2/15) … recorded a season-high nine rebounds twice, first against Bethany JV (11/22) and then at Butler CC (Kan.) on Feb. 1, 2020.

HIGH SCHOOL
Was a three-year letter winner at Roosevelt High School before attending Elite Prep in Washington prior to joining Coffeyville CC … first player from Roosevelt HS to play at a DI school since 1980 … led Roughriders to back-to-back OSAA 6A Tournaments his last two years – including a second-round appearance as a senior.

Son of Billy and Audrey Holt … has an older brother, Billy Holt Jr., and three older sisters, Alexia, Kimberley and Shaniece … father played on the defensive line at Oregon (75-78) while his mother still holds the hurdles records at Springfield High School (1980) … brother Billy was a tight end at Texas Southern (2001-05) … uncle Keith Reynolds won an NJCAA title as a member of the Southern Idaho men’s basketball team before transferring to Oregon (1989-90) ... cousins Ariel Reynolds was a member of the Utah women’s basketball team (2012-14) while Jordan Reynolds was a member of the Tennessee women’s basketball (2013-17) and was a McDonald’s All-American out of high school … majoring in sociology.
Ethan Channel
020-21 (Junior): Channel started eight games during his initial season with UMN Crookston...He appeared in eight games before a season-ending injury...Channel averaged 25.9 minutes per game...He shot 49.3 percent from the field and 33.3 percent from beyond the arc...He was a 70.0 percent free throw shooter...Channel notched 10.0 points and 4.9 rebounds per game...He had a season-high 19 points against Minot State University Jan. 22...He was 8-of-12 from the field and 2-of-4 from behind the three-point line...Channel had 18 points and seven boards versus Northern State...He was 7-of-13 from the field and 3-of-5 from beyond the arc...Channel tallied 17 points against MSU Moorhead...He had a double-double of 14 points and 10 rebounds against MSU Moorhead Jan. 8.

Personal: Channel is the son of Heather and Thomas Channel...He plans to major in marketing at Minnesota Crookston...Channel was born March 16, 1999...His father Thomas Channel played at Mount Hood Community College and Boston University...His father was drafted in the third round of the 1979 NBA Draft by the San Diego Clippers, and played overseas for basketball...His father also played minor league baseball as an outfielder from 1975-77 in the Minnesota Twins minor league system... Thomas Channel was drafted by the Minnesota Twins in the 38th round of the 1974 MLB June Amateur Draft...His dad averaged 19.3 points per game during the 1978-79 season for Boston University...His aunt Lisa Channel was a student-athlete at Oregon State University.
Print