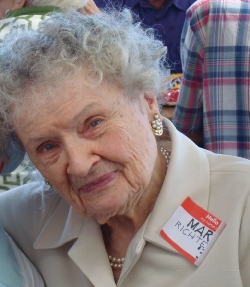 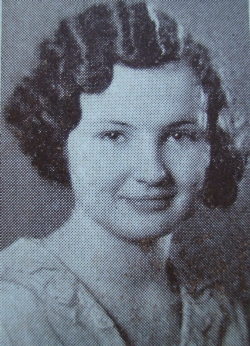 WaHi Alum Passes Away at Age 100
Richter, Mary 100 Nov. 27, 1913 Jan. 13, 2014. Mary was born the youngest of four children November 27, 1913 in Prince Albert, Saskatchewan, Canada. She immigrated with her family to Portland at the age of nine. She was in the first graduating class of Abernathy Grade School and graduated in 1931 from Washington High School.
Following graduation she secured a job at Meier & Frank and remained a Meier & Frank employee for 45 years. She eventually was promoted to assistant buyer in accessories, and jewelry, and then became a buyer, which necessitated buying trips to New York. Mary was required to retire at age 65, but was called back off and on for several years. She also worked for a time at a drycleaners after retirement. Never one to be idle, she helped her sister knit hundreds of warm caps for the needy. She enjoyed doing latch hook work, working in her yard, and caring for her home. She was a Past Noble Grand of the Rebekah Lodge.
Mary went back to Meier & Frank in the 1990’s as a volunteer for Oasis (a national education organization dedicated to enriching lives of adults age 50 and older through lifelong learning and service) retiring once again in 2008.
Read: Mary Richter Obituary
Print