The Remarkable Career of Bill Gray 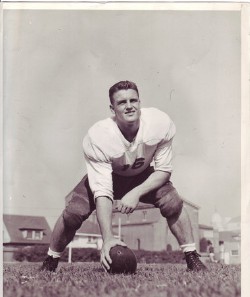 Two Rose Bowls, NFL, Respected Educational Leader and Former WaHi Principal
Bill Gray, a Portland native and former Oregon State All-American and NFL player, died at age 88.
Gray, who also worked 30 years as an administrator in Portland Public Schools, had a unique football career. He played for Rose Bowl championship teams with the Beavers and also with USC before playing professionally and snapping the ball to the legendary Sammy Baugh.
After playing at Benson Tech, Gray began his Oregon State career in 1941. As a freshman, though, he could not play in the Beavers’ 20-16 Rose Bowl win over Duke in January of 1942, the year the bowl was moved Pasadena to Durham, N.C., because of the attack on Pearl Harbor.
He lettered with the Beavers in the 1942 season before joining the Marines and being stationed in Los Angeles. There, he was allowed to play for USC, a “Marine Trojan’’ in the V12 program, and was a member of the 1943 USC team that beat the University of Washington.  >>Read more
Print