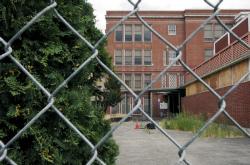 Public Schools Agree to a $2 Million For Long-Vacant Washington High School
Published: Friday, April 13, 2012, 5:23 PM Updated: Wednesday, May 02, 2012, 5:50 PM
After a year of negotiations, Portland Public Schools and a local redevelopment company have reached a $2 million deal on long-vacant Washington High School.
The school board will discuss the proposed sale in a closed meeting Monday, then take it up publicly April 23.
If the deal is approved, Venerable Group Inc. -- the firm that renovated the White Stag Block in Portland's Old Town and the 1883 Ladd Carriage House downtown -- will have 270 days for a feasibility study. It intends to turn the school into housing, but doing so will require a patchwork of funding and some creative planning to preserve the school's architectural character.
"I'm going to have to pull out all the stops to make this financially feasible," President Art DeMuro said Friday.
The 1924 building has all the trappings of a high school, including large common areas and a 600-seat auditorium. That doesn't make for efficient housing. DeMuro also said only about 60,000 of the school's 112,000 square feet could be used as living space.
The electrical system and plumbing need upgrades, and the rest of the building will need to be restored and improved to be suitable for housing.
The facade, too, will need to be restored. Venerable has agreed to list Washington High on the National Register of Historic Places, either on its own or with the rest of the Buckman neighborhood as a historic district.
That opens the door to certain tax credits but means the school will need to keep its historic look.
Parking would be an issue as well, DeMuro said. The sale doesn't include adjacent land except for a small parking lot to the south. The nearby fields have already been sold to the city of Portland.
All in all, DeMuro said improvements would cost nearly $20 million. Financing would come from sources likely to include a conventional loan, historic preservation tax credits, federal New Market tax credits, energy efficiency tax credits and possibly urban renewal subsidies.
It's not clear what form the housing will take -- apartments or condos, at market rate or low rent -- or how the common space will be used. Venerable has agreed to provide a room for community meetings.
Aside from that, DeMuro is loath to make many commitments on the project. Although Venerable's projects are often challenging because of their historical nature, he said this one might be "another step up the ladder."
"I think it's an extremely iconic and core part of the Buckman neighborhood," DeMuro said. "I'm personally concerned about it, and I'm also professionally challenged to try and make it work."
Link To Article
Print