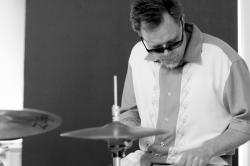 Class of 76 Alum Busy as Architect, Musician and his Family!
Many of you might remember Ron van der Veen tapping in class when he was bored, tapping in the locker room before basketball games when he was nervous, tapping on the bus home to irritate friends. Ron has tapped his whole life, but finally found the groove about 18 years ago when he bought an beat up drum set at a garage sale. With encouragement from his old buddy Greg Porter, Ron spent several years practicing until he eventually put a 10 piece soul band together called THEmediocres-equipped with horn section. After 8 years of relative success around the Seattle area, Ron decided to start another project recently and has formed a new band called: LISA D and the GROOVE.

Lisa D is the lead singer and can melt ice with her vocals. Though the band plays a wide variety of rock, blues and soul, Ron has always stayed true to the funky grooves of his WAHI roots.

A new Facebook site up really soon. If you can’t wait go to www.themediocresband.com as the transition is made.

Maybe we can even get him down to Portland for a gig!