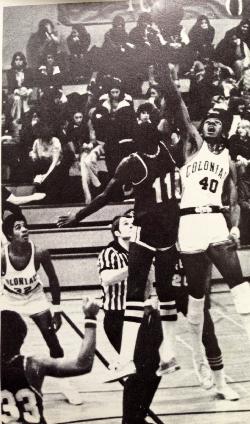 First African American Player To Play Basketaball at BYU
By Adrian Wojnarowski
Special to ESPN.com
February 2003
Keith Rice, Class of 1975 went on to play basketball at Brigham Young (after 2 years at Mt. Hood Community College). Keith and Danny Frazier were the first African American sto play at BYU - in 1977.
Exert from ESPN article:
When Danny Ainge arrived (to BYU) in 1977, he roomed with a black player, Keith Rice. Through the years, Ainge has stayed close to the program, even sending his own son to Cleveland on a basketball scholarship this year. Ainge is a link to the most glorious time in BYU history, his coast-to-coast drive and lay-up to beat Notre Dame in the 1981 NCAA Tournament the most unforgettable moment in Cougar lore. It brought BYU to the Final Eight, where it lost to Virginia. The Cougars have never come so close to the Final Four again.
"My experience at BYU with African-American players is that the ones that go there and have great success, because they're really good players, have a better experience," said Ainge, the Wooden Award winner his senior year in 1981. "Not just at BYU, but everywhere, sometimes the race card is pulled when people don't get their fair shake -- don't get as many minutes, or shot attempts, or as much freedom as other players. Typically, those are the players who aren't quite as good.
First African Americans to Play at BYU