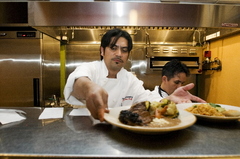 Eatery Opened By Hugo Hernandez and Wife/Alum Terri (Brooks) Hernandez
Mexico, a fonda is a street-food vendor or a makeshift operation set up in the garage of one's home, selling tacos, tamales and aguas frescas to passers-by. Rosa means rose. Put them together and you have Fonda Rosa, a new Mexican eatery on Northeast 28th Avenue's restaurant row.
Fonda Rosa reflects the union of chef Hugo Hernandez and his Portland-born wife, Terri Brooks-Hernandez (Washington High School Alum, Class of 1976), and the marriage of authentic Mexican cookery and Oregon ingredients.
"What we're doing here is the Mexican cuisine of my home with a little bit of a Northwest influence," Hernandez says. He cites as examples salmon asado, a grilled entree served with smoky chipotle tomato sauce, and Dungeness crab enchiladas with tomatillo sauce.
Fonda Rosa is the restaurant Hernandez dreamed of opening. He grew up in Colima and Jalisco along Mexico's central Pacific coast, learned to cook by helping his mother with her small restaurant, and came to recognize good food simply by eating at family-run restaurants where everything was made by hand. At 18, intent on learning English, he headed for the Bay Area and later moved to Seattle and fell for the sister of a co-worker.
Hernandez had been in Seattle eight years and was working for Cucina! Cucina! when Teresa returned to Portland. Fate intervened. The Italian restaurant asked Hernandez to transfer to its planned Portland location.
Eventually he landed at Manzana Rotisserie Grill in the Pearl. There, he shared his idea for a seafood-centric Mexican restaurant with friend and general manager, Mike Schnidrig. Meanwhile, Teresa acquired a women's resale shop at Northeast Couch and 28th and kept the business going for years until she and Hugo came up with the money to launch a restaurant. Recently, Schnidrig came aboard as a partner and investor, making Fonda Rosa a reality.
Using family recipes, Hernandez makes everything from scratch, including corn tortillas and avocado salsa. With entrees less than $20, he says affordable prices sets Fonda Rosa apart from other quality Mexican restaurants. "A lot of the Mexican restaurants here charge a horrendous amount of money for a little piece of food," Hernandez says. He doesn't skimp on sides, either. "In Mexico, a meal is not a meal unless it's served with beans."
108 N.E. 28th Ave.; 503-235-3828. Open 5-10 p.m. Tuesday-Thursday, 5-11 p.m. Friday-Saturday.  Link To Map:
http://www.oregonlive.com/dining/index.ssf/2007/12/platter.html
Print