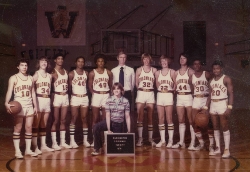 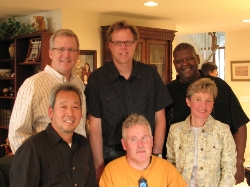 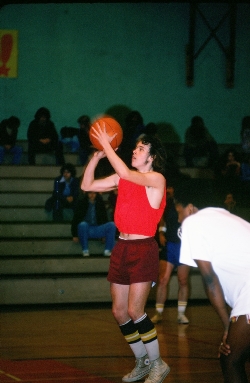 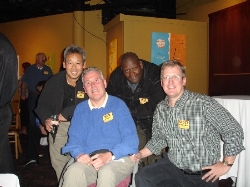 Long Bout With Multiple Sclerosis
Witten By Classmate Ron van der Veen - January 20, 2009
Rob Heroux is one of the greatest men I have ever known.  And It looks like today he is going to accomplish something he has looked forward to for many years:  He is going to meet his God in person.
Our friend Rob, a man of deep faith, has battled many giants since being diagnosed with Multiple Sclerosis in his early 20’s.  Up until the end of his life he has taken this debilitating disease and fought back over and over again.  This is the guy many of us used to call “Harry Hustle” on the basketball court of Washington High School, because he never stopped busting his butt with his tenacity.  He lived this way until the end of his life.
Today the decision has been made to allow Rob to go home.  I am not sure of the specifics, but the complications of his infections this last week took their toll on his body and mind.  Rob had a bunch of hopes and dreams about life that he was never able to see fulfilled, but being with God is one that can’t be taken from him, ever!
Today, in honor of Rob, I hope you will say a prayer for his family, shoot a few free-throws (he loved free throw shooting), run a 440 as fast as you can, have a cool beer, watch a Blazer game on TV (Rob LOVED the Blazers!!!!), listen to a few old Earth Wind and Fire songs,  pull out your old year book and take a look at that wacky head of hair he used to have.  Please remember what a great man Rob Heroux has been.
Rob Heroux passed away January 20th 2009. A Celebration of Life will be held at the Grace Chapel located at 9600 SW Boeckman Road, Wilsonville, OR, 97070 on Saturday January 24th at noon. For directions to the Grace Chapel, click here.

Please note that in lieu of flowers, donations can be made to the Deacon’s Fund at Grace Chapel.  You can donate online at to the Grace Chapel Online Giving (note in comments that this is in honor of "Rob Heroux / Deacon's Fund") or you can send a check to the Grace Chapel Church Office at 28925 SW Boberg Road, Wilsonville, OR, 97070.